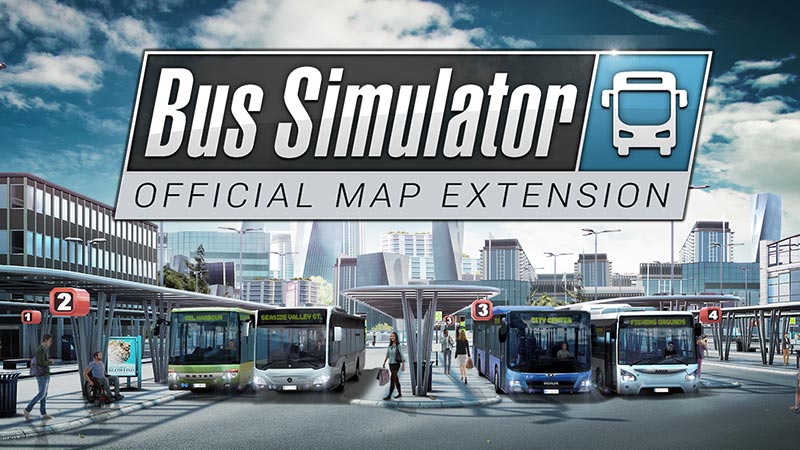 Düsseldorf/Germany, April 14, 2020 – Heading for new realms: In the Official Map Extension for Bus Simulator on PlayStation®4 and Xbox One console players can be looking forward to two additional city districts, a new transportation hub consisting of an airport, numerous additional road miles and challenging missions in Seaside Valley.

The Official Map Extension for Bus Simulator on PlayStation®4 and Xbox One extends the popular simulation game by a huge, as of yet unexplored area in the southern part of the main game’s map – including numerous new road miles and the two city districts of Kerststadt and Sonnstein. While the university district of Kerststadt with its nearby airport is known as the region’s “TechHub”, the idyllic mountain village of Sonnstein counts as one of the most popular tourist attractions for nature lovers in Seaside Valley.

In addition to the new areas, players can also look forward to nine new missions. Within these missions the player's task will be to link the two new districts, the airport and various additional tourist attractions with the city center of the Bus Simulator metropolis Seaside Valley.

The extended road network of the Official Map Extension does not only include 20 additional bus stops, but also varied landscapes as well as some really challenging road sections. Especially on the route between Kerststadt International Airport and the mountain village of Sonnstein, bus drivers will be able to put their driving skills to the test, when maneuvering their vehicles through narrow tunnels and tight serpentine curves. As a reward, players will enjoy a whole range of unique panoramic views across the dale and the sprawling urban areas of downtown Seaside Valley.

For even greater variety, players will be able to unlock new skins and stickers for their bus fleet, tackle new challenges for additional trophies and listen to a number of new passenger dialogues while driving through the new areas of the town and its surroundings.

Just like in the Bus Simulator main game, the new urban areas and missions of the Official Map Extension can also be explored in the multiplayer mode together with up to three other players.